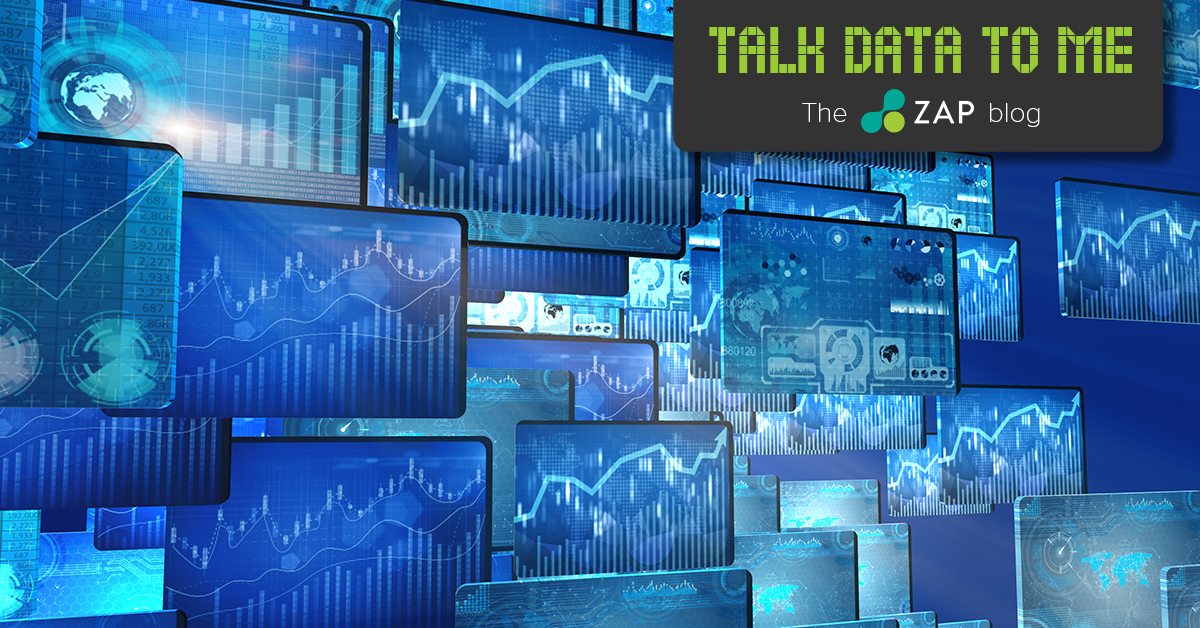 The ancient, overused adage of “a picture is worth a thousand words” can almost be considered a gross understatement in the business intelligence universe. As BI experts, we know that data visualizations are worth way more than a paltry thousand words. This is particularly true within the self-contained narrative of finance where many hours are actually spent recalculating numbers into actual intelligence—for ourselves and for others.

All you finance people are currently nodding your heads in collective agreement, right? I thought so.

Columns, rows, colossal numbers, budgeting systems, spreadsheets and all other financial schema should be visually represented in a way that’s digestible for the rest of the business. Because, at the end of the day, your data is only as good as your ability to communicate it.

(You might also be interested to read "“Dashboards are sexy, dashboards sell”... But how can dashboards deliver success?")

Taking advantage of our body’s natural pre-attentive processing and the fact that we innately understand shapes, colors and symbols better than anything else, data visualizations and visual analytics for finance can help us comprehend what’s going on much faster and more intuitively.

Why? Because numbers and data give us nothing more than numeric values. Visualizations give you an opportunity to discern relationships in the data and doesn’t distort what the data has to say.

You don’t need the business intelligence industry barking this to you, though – it’s your brain working the way it’s actually supposed to.

Let’s take a closer look at how some of these visualizations can translate deep, impenetrable data sets into more effective insight for those who are seeking more accessibility.

I spent a good portion of my career as a Controller and Chief Financial Officer for both public and private organizations, so yes, I was a number cruncher in the most stereotypical way imaginable. I’ve also evolved as part of the non-visual analytics, traditional model into the new wave expression of data, which means I have a solid appreciation for the limitations of the past.

The majority of financial reporting packages that I worked with were nothing but one spreadsheet or numerical-based report after another. The sheer volume of data alone was enough to make a person fully susceptible to simple mistakes. If you’re not visually differentiating objects (in this case, numbers), they truly do start to blend together.

Sounds obvious, but here’s an example:

As many of you in the finance industry already know, income statements typically only provide a month to date, quarter to date and year to date view of the data and compare actuals to budget. By looking at a sheet of paper containing a bunch of numbers exclusively, you’re forcing your brain to kick into unnecessary overdrive and connect the dots behind the scenes. You’re given numbers and figures, not trends, correlations and outliers.

By having a barrage of quantitative and continuous data that you’re responsible for processing, it’s quite easy to overlook trends that are occurring, effectively preventing you from taking proactive actions with confidence.

Something as simple as a line graph or a bulleted bar chart would have allowed me to analyze the data better. Both are extremely versatile in showing changes to values over time, comparing different categories or comparing parts of a whole. The key measure (value), comparative measure (goal) and qualitative ranges (good, bad, exceed) would have afforded me the opportunity to process the multi-dimensionality of the income statement holistically as opposed to mechanically.

Based on this type of acute view, I could have transmitted out to the team which corrective actions needed to be taken.

Tell me which format below is easier to digest. Thought so.

Not Everyone works in Finance

Another obvious benefit of having visual representations of financial data that often gets overlooked comes from the fact that not all of the viewers of financial data have a finance mentality. Contrary to popular belief, and Copernicus himself, the world doesn’t revolve around financial wizards.

In my past experience, I dealt with marketing executives (some; not all) whose only exposure to any type of accounting was the required Accounting 101 course that they took in college. To hand them a report with a bunch of numbers on it was like handing them a schematic of the International Space Station and asking them to explain it to you.

Here’s what that looks like, by the way. (Source: NASA) 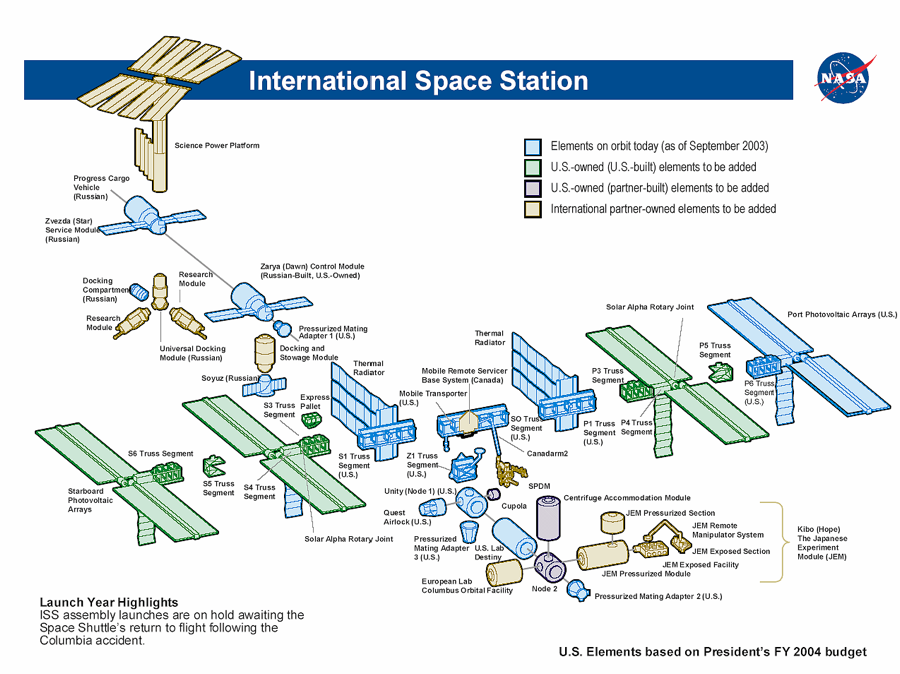 I’ve found that the majority of individuals outside of the finance organization tend to be more creative in how they absorb information and would benefit greatly from seeing a chart or graph tied to operational data. Visual information and graphical representations can help bridge any communicative gaps between teams and departments because it invokes more ubiquitous inductive reasoning traits.

I think Leo Sadovy (SAS Institute Inc.) synthesized this argument best when he said, “if I’m going to help business decision makers, I have to understand – though we in finance think in terms of dollars – it’s really dollars per something else or something per dollars.” All this really means is that data is multi-dimensional and modular, and should be viewed this way instead of an inundation of numbers and detail.

So, we’re essentially talking about “the bigger picture.” Let’s look at another lesson that supports this point.

Consider a marketing personnel analyzing expenditures (weird, huh?). They could look at a chart that details out their spending by, let’s say, account code and see where the majority of their money is being spent. Providing them with a graph that shows their actual spend versus their budget over a period of time allows them to expediently see how they’re trending.

It also gives them the opportunity to alert the finance team of upcoming expenditures that may cause a variance to budget in an upcoming month. If you provide them with a graph that shows them significantly under budget for the first six months of the year, it would at least start a conversation between the marketing and finance groups to determine if there was an error in the budgeting process, or if there is a large marketing campaign going to happen within the next month or two that will bring the expenses and budget in line with each other.

Visualizations in finance would also be extremely beneficial during any budgeting cycle. I’ve seen many organizations look at the current year expenses, annualize that number, increase it by 5%, and then spread it evenly over the next 12 months. Let me provide you with a visual of how this happens:

Looking at the data set above, a finance-minded individual could reasonably assume that the marketing group started gearing up for a big promotional event that took place in June with some of the expenses flowing over into July. A marketing minded individual might look at the same information and see that they’ve spent $87,650 YTD which is under their budget, so hey, life is good. 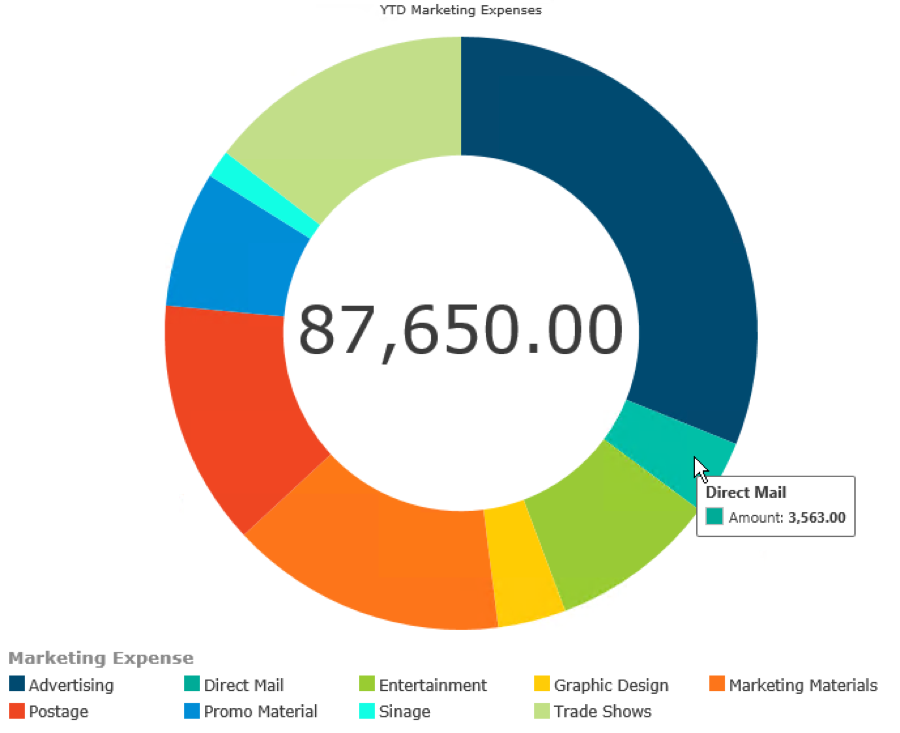 Alternatively, if you were able to provide that same marketing executive a graph of how their money was spent over the last 9 months as compared to the budgeted amount, it may cause them to rethink their budgeting methodology for the upcoming year. 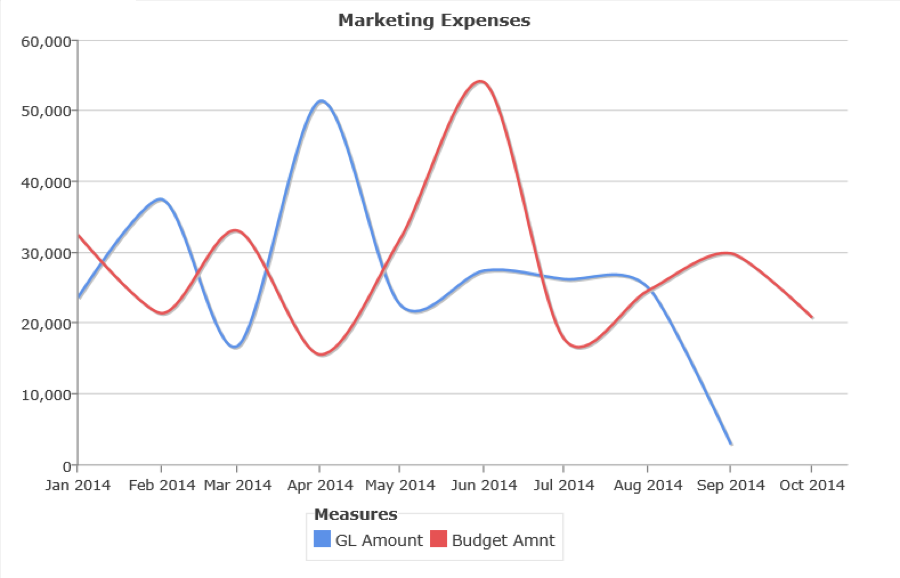 Hopefully, Company ABC saw a huge increase in sales in the month of July after this big marketing promotion, which in turn would provide information to the operations manager of the organization that production will pick up in the months of July and August.

If this is analyzed year over year, and the marketing department does their big marketing promotion in the month of June, it would also allow the operations manager to act proactively and get the necessary staff on board and trained to handle the big push in production.

Also, the financial results of an organization are the responsibility of every individual within it. The type of visual representation used to present financial data to your target audience should no longer be characterized by a dump in Excel followed by a canned sequence of generic reports.

With the use of dynamic visualizations via business intelligence solutions, everyone is capable of producing actionable insights—with or without a high degree of theoretical financial literacy. The visual presentation is as important as the accuracy of the data and will have a ripple effect throughout the organization.